Do you know the top 3 Foodie trends headed this way from North America?

We’re BACK following our 2 week summer ’14 shutdown, oh lovely Friends of Rex!   We were in the Vancouver area of Canada & have spotted lots of bakery-relevant trends, opportunities…. And ironies to think about.  Here’s 3 we expect to hit Little Chalfont…

“Free from” claims are being made EVERYWHERE alongside Organic, Natural, Wholefoods as if gluten is something Nasty to now avoid. 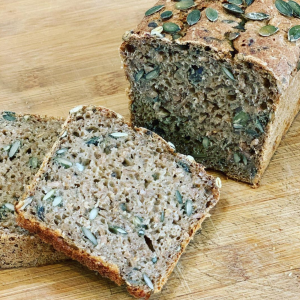 In fact only a tiny proportion of the population actually has a gluten allergy, whilst most of us are just reacting to poorly fermented fast-bread & bakes.  We ALWAYS recommend Rex Sourdough first for those concerned with Health, because it has been developed care-fully & slow-ly by hand to ensure a full 3-day fermentation of the live culture before it hits your tummy.  Read here how Rex Sourdough WITH gluten in its organic flours is a naturally low GI, health bread…

Given the “free from” trend, we expect our wheat-free alternatives like Hazelnut Chocolate Brownies, Granola Bars, Light Rye and Spelt Loaves to become increasingly fashionable…  especially the sourdough loaves!

Oh the irony.  At the same time as we see Gluten-free as a health claim, on every single Canadian intersection you will see a Tim Hortons, a DQ (Dairy Queen) and an A&W (root beer & burgers).  Tim Hortons specialises in doughnuts & hot drinks, and has just been acquired by Burger King.  Its Timbits are considered an essential feature of any big-Canada road trip, they are the balls from the centre of ring doughnuts & come in many different flavours.  Watch out, arteries!

We visited loads of bakeries… which weren’t!  Even when Bakery was in their shop name, they in fact sold coffee & sweet pastries and NO bread?!  As an artisan bakehouse we like to think they are missing a trick.  However, we were interested that some were chocolatier specialists (we liked their mini brownie bites), others displayed mainly viennoiserie especially chocolate croissants, and many specialised in large sweet gateaux for sale in slices or as whole cakes.   Canadians seem to like to get their sweet hits from their bakeries and the choice is inspiring!    Expect more new indulgent products in Rex very soon…

The breadth of coffee choice goes from Starbucks on every block, to that undrinkable black stew found all day in a heated coffee pot in diners… and in-between these extremes, this Coast is of course where real coffee cafe culture with latte art originally developed.  There are many, many places to buy coffee literally everywhere; and everybody seems to be carrying a take-out cup at all times.  Little Chalfont has a long way to go because Vancouver coffee consumption levels are double ours – even though it was honestly quite hard to find extremely tasty coffee like our delicious Monmouth!

Tea is hot, hot, hot in North America!  World teas are so much more popular & fast growing in Canada than here – perhaps because theirs is a relatively young culture melted together from so many immigrant settlers in the last century or so, each with their own strong tea traditions.   This is a part of the world that likes to experiment with food cuisine, and world teas & new innovations are on poster ads everywhere.

For example, we came across London Fog – a combination of Earl Grey, frothy milk and vanilla syrup (ok, that risks being a bit yuk & chemical).  This tea latte was apparently invented in Vancouver and has been in Starbucks since 2004.  At Rex, as well as our Monmouth coffee & excellent hot chocolate, we do sell a wide range of world teas.

All these trends could make us thirsty – so we are planning to start a hot drinks loyalty card scheme soon.  We do hope our world teas  will be chosen by friends of Rex as part of that!

Thanks for coming back to us after the shut-down, and see you soon xx