Why Rex Artisan? Learn what’s in a name 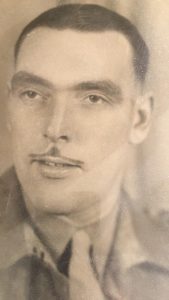 The name Rex is inspired by Glenn’s grandfather, Rex, who was THE original artisan.   As a little boy, Glenn was  always impressed by how his grandfather Rex would & could turn his hand to anything – superb at gardening, carpentry (he made dolls’ cots & a beautiful dolls house when the Glenn’s mum Bev & aunts were little girls), he also built his own brick workshop & then an extension to his house including  laying all the drainage pipes for the  indoor toilet, all on his own. He could cook and even dress-make for his girls.    Rex was a self-educated man, having left school at 14 because his own parents needed him to bring in money to the house, much to the regret of his teachers.  He started as a gardener’s boy and was in the Army reservists but once World War II started he formally joined the Royal Artillery to fight all across Europe.  Over nearly 40 years with the Army, he made his way all the way up to be  Major with an MBE.

At the end of his career he trained officer cadets at Cambridge University – typically getting up at 5am to work on his own workshop projects, working a full day & then coming home to continue his graft.  Sadly he died young in his 60s after suffering a rare & severe form of arthritis leaving him totally debilitated, unable even to wash & shave himself.  Rex left an incredible legacy of work ethic & artisan passion to his grandson & the name Rex is in our own son’s names in his memory.

Besides – it’s a short sharp fabulous name, and as the Rex Bakery aims to be a sharp & modern take on artisan baking, this seemed the natural choice.

What does Artisan mean?  As part of his training, the Rex Baker took a course at the School of Artisan Food & apprenticed at an Artisan Bakers in North London and whilst there’s no exact definition, we do like these:

An artisan (from French: artisan, Italian: artigiano).…. practice a craft and may through experience and aptitude reach the expressive levels of an artist…

Artisan means a skilled person, a skilled worker, or a craftsman. It comes from the word artesano, which means ‘to instruct in the arts.’

In foods (baking, cheese etc) artisan is not just the craftsman but it’s used as an adjective (aka artisanal)  to describe the approach to creating the food.   It means hand crafting, not automated/ industrialised factory processing.  It refers to small quantities, simple slow traditional methods, high quality & an art (innovation) in creating new products.   Unfortunately it can be rather misused so don’t be fooled by “artisan” claims by big brands & chains!

The whole artisan bakery movement started as a reaction against factory bread.   Instead, we hope to bring you lots of inspired, delicious hand-crafted artisan treats  in the coming months & years.